Isaac gave Florida a pass and is heading on to landfall in the northern Gulf. Our area got heavy rain and some wind but no real storm impact. When Al and I had our first experience with a hurricane, we learned what "sustained wind" meant. In all the violent rain storms we had experienced in other areas of the country, wind speed went up and down, up and down. In a hurricane wind speed goes up and stays there. Gusts are on top of that already high wind speed. Isaac's sustained winds for were in the 25-30 mph range when bands of the storm went over us. Saying it another way, Isaac was no big deal as tropical storms go. A real storm would have sustained winds much, much higher that what Isaac dealt us. And it is why we feel such sympathy and concern for those on the northern Gulf coast who are being battered by Isaac as it literally stands still, pounding them hour after hour after hour with true hurricane force winds.

On a brighter note, after several days of being trapped in the house, Al and I were really delighted to get out and burn some energy on a nice bike ride this morning. At an hour past dawn the temperature was 81 degrees with a dewpoint of 75 degrees (hot and sticky), but there was a good size wind from the south and lots of cloud cover. Our route split the difference between riding with a headwind and with a tailwind. We did the headwind portion first, then enjoyed the tailwind home. (Sweet.)

We took a short ride this morning. We haven't biked in almost a month. We've been water skiing (Wake Up and Water Ski), and we rarely bike on days we've been skiing. Today we just wanted to get out and stretch our legs. Isaac is coming. We are going to be stuck indoors for a couple of days.

Lots of people had the same idea as we did. There were more cyclists, walkers, and runners out than usual. Still it was hard imagining that a big storm was coming our way. It was windy but still quite nice. The skies were only partly cloudy.

One thing we did notice. Recent rains had turned areas where on our last ride cattle were grazing into areas with several feet of standing water. Drainage ditches beside the roads looked like creeks. Man-made retaining ponds were beginning to fill. In other words, things are going to flood in these low-lying areas when Isaac comes through.

Isaac will be passing a little to the west of us. Right now we expect it to be primarily a big rain event rather than a big wind/big rain event. We are making some nominal storm preparations outside. We will probably have sustained winds around 35 mph with gusts in the mid 40s. Which means things that are easily blown around need to be put away or tied down. We will close the hurricane shutters on our back screen porch as well. It saves damage to the screen porch and cuts down on the amount of rain blown in. In 2004 Hurricane Charley was on a similar track and was supposed to steer clear of us. Then the path changed just a teeny-tiny bit at the last minute. Charley paid us an unexpected and quite unpleasant visit. That taught us that the best plan is to expect things to be fine but to be prepared for much worse.

Venus in All Her Splendor 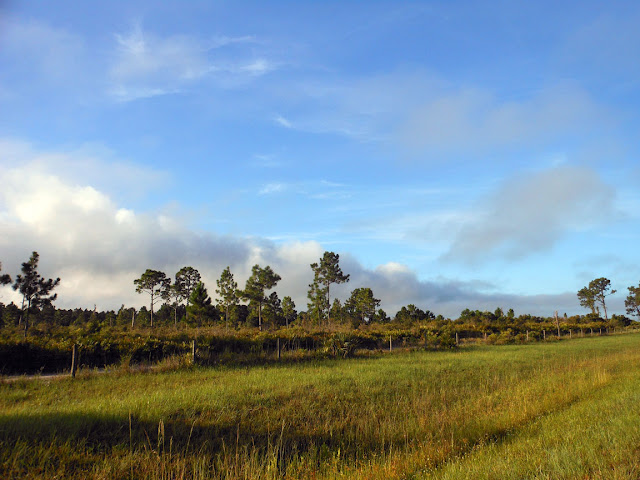 Venus, Florida, like many rural communities, is found by deciding where the sparse scattering of homes is densest. It is a popular destination for cyclists in our area. Today a tropical wave will be moving over the Florida peninsula. It should bring us rain this afternoon and evening. But this morning was perfect for a ride.
Posted by Marsha at 9:52 AM