Spring is here. On today's ride we saw maples blooming (ah-choo!) Out in the scrub, the few deciduous shrubs and shrubby trees had pushed out a haze of green new growth.


Normally on Saturday, particulary a pretty day like today, there are lots of cyclists, joggers, and walkers about. But not today. Biking down the deserted roads, it felt like we were in the opening scene of one of those post-apocalyptic horror movies. It sure made for a fast ride. (No, we were not fleeing possible roaming hordes of zombies. Just making jokes about them.)

I like clever. On our ride today, we ran into Chuck feeding scrub jays. Chuck pedals around on your basic cruiser, but he made himself a dandy peanut carrier that attaches and detaches quickly. It's simply a plastic storage container attached by velcro to his bike's front reflector. Clever.


It was a beautiful day to be out on a bike: sunny, mid 70s, and almost no wind. One odd thing: there was a virtual vulture convention going on. They were high in the sky riding the thermals. They were perched in dead trees. There were more of them than we've seen all winter. And every one was a turkey vulture. Spooky!

We spent a couple of days in Miami. We went to the neighborhoods between the Rickenbacker Causeway (that leads to Key Biscayne) and the University of Miami.  This takes in parts of Coconut Grove and Coral Gables.

Miami has a decent system of bicycle routes and pathways. We contacted the city by email and had a current bicycle route map sent to us. The city is expanding its bicycle network, and it is making steady strides towards becoming a top bicycle city. At present it may still lack the comprehensive network of routes needed to be great, but it's climate and beauty give it a major edge on other bicycle friendly cities.

We checked into the Holiday Inn by the University of Miami. The desk was amused when we explained what the two large pieces of luggage were. They gave us advice about navigating the immediate neighborhood by bicycle. We started each day at a nearby coffee shop. I love where we live, but it is hard to get a decent coffee there. In Miami, expresso is everywhere. (Heaven.) We biked east through a warren of residential streets. There are lots of truly wonderful homes here. Some are elaborate gated affairs, others more humble dwellings. All have the most wonderful landscaping.

At one point we rode over a tidal creek lined with boats.  Manatees swam lazily down the creek below us.

Eventually we left the quiet residential streets to follow paved a bike path that lead north. Besides us, there was a light assortment of walkers, joggers and other bicycles.

The paths are reasonably well marked. Most of the route we followed was paved trail. In some areas we took routes that were marked bike lanes.  Our ride was punctuated by quiet city parks.  Most were pocket parks in residential neighborhoods, but several were larger affairs, especially those that adjoined creeks or Biscayne Bay. We stopped at a dog park to watch the dogs playing. We were fascinated by one dog and talked with his owner. She brought him over so we could meet him, a frisky Chinese Crested. He was a delightful dog--friendly, playful, and he actually pranced when he ran! My picture of him didn't come out, so the one in this post is one from the web that looked like him.

Eventually we biked into Coconut Grove.  The streets were lined with interesting small shops, restaurants and a few bars. A small state park (Barnacle) is located right downtown. It would have made a nice place for a lunch, but we pedalled on. 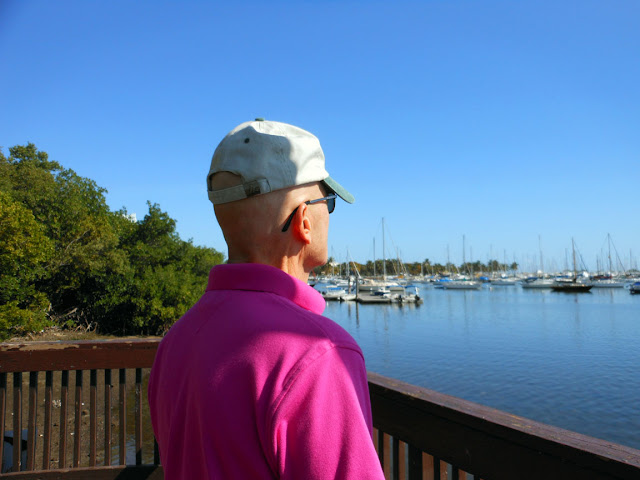 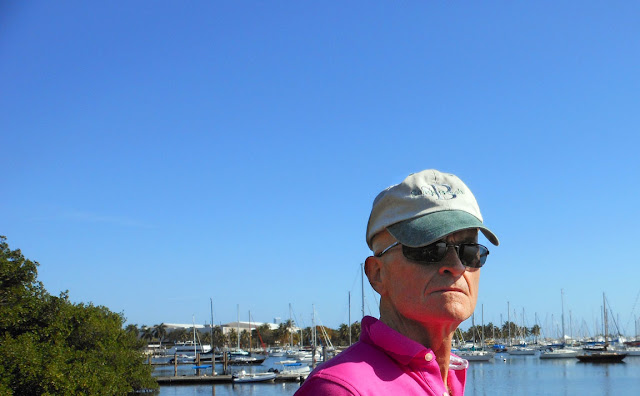 We meandered though quiet neighborhoods, passed gated communities, the Mercy Hospital complex, a half dozen schools and academies, churches and synagogues.  Finally we came to South Bayshore Drive and the parks and marinas that line that area. We spent a few minutes admiring the boats, of course. 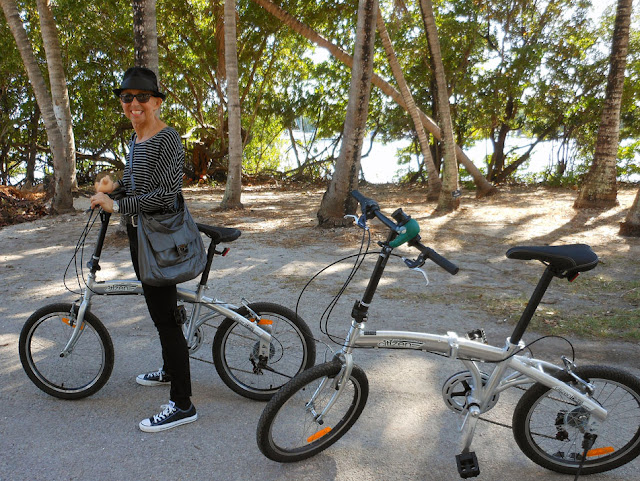 The parks were pleasant. We chatted with three visitors who were trying to find a grocery store. They were backpackers from Africa. When we asked if it was it cold there, they said they couldn't say. "We follow the sun," one said with a smile. We couldn't help them, so we pedalled on. Two blocks further, we spotted a gourmet grocery. A bit more than the backpackers may have wanted, but miles closer than any other. So we doubled back, found them, and got them headed the right way. A few more words of passing conversation and we headed on enjoying the bayfront parks along the strip. In time we ended up back at the gourmet grocery for a late lunch. We ate our yogurt and sipped our bottled water sitting at one of the shaded tables set near the orchids, bromiliads, and other flowering plants for sale in front of the grocery. Office workers sat at nearby tables. We all watched the people carrying their groceries off to the marinas.

We cut inland and followed another bike route back to our motel.  A really super day.

Years ago my job took me to Washington DC about once a year. The free time of my first visits was typical: museums, monuments, tours. After many visits there, I still found things to see and do, but I wasn't that excited to be there. Then one trip I checked into my hotel and asked the concierge where I could rent a bicycle. I easily rented a bike, and along with the bike the shop gave me a local bike map and a lot of recommendations on where to ride. I spent every free hour of the next few days pedalling around the city. It was amazing. A whole new city opened up for me. I was hooked on tourist biking.

Think about it. How many of the "tourist attractions" of the city and area where you live do you actually go to? Not many if you are like us. Those places are destinations only when you have out-of-town company you need to entertain. Using a bike as transportation in a city you are visiting pushes you into going to and enjoying the places where locals go and hang out. Something a simple as going out for a coffee or a sandwich is interesting. And, believe it or not, people talk to you like you actually live there!

Being a bicycle tourist is easy. If you don't want to rent a bike, you need to carry your bike with you. An alternative to carrying standard bikes on a bike rack is carrying folding bikes. They come in their own suitcases. They have smaller tires than regular bikes, but they ride pretty much the same. Remember, this isn't fitness biking, so nothing fancy is needed. Our favorite travel bikes are by Citizen Bicycles. They are the model they call Gotham.


Each bike weighs about 27 pounds. Easy to carry around with a shoulder strap in it's soft suitcase.

Like most winters, we've planned a series of short city trips. Our first will be to my favorite Florida city, Miami.
Posted by Marsha at 11:07 AM

Something New at the Radio Controlled Plane Club

Today's ride looped us past Riley Field, the local radio controlled airplane club's airstrip.  The little planes are always fun to watch, and we often stop.

Above the field today was a plane unlike any we had ever seen there.  We didn't just stop on the road today.  We turned down the field's driveway, and pedalled over to where all the club members and their planes were.  Lucky for us, the neat little plane was just landing.  We talked to the plane's owner for a while.

The plane was a radio controlled combat plane.  The plane's owner had made one for each of the other club members.  It's made of foam insulation board bought at Lowes.  Each plane costs only about $17-$20 dollars to build.  These planes are fast and designed for "combat flying" which he enthusiastically described.  Translating what he said into my vocabulary, these planes fly around and crash into one another, sort of a demolition derby for radio controlled planes.  Now that sounds like fun.

We told the guys that we'd be watching for this combat flying when we passed the field.  We'll absolutely stop to watch something like that!!

There are some things you never leave home without.  If you are riding in the Florida scrub, always carry peanuts.

We carry 2 ziplock snack bags of raw peanuts in the shell whenever we head out on a local ride.  They are for the scrub jays.  Scrub jays are friendly, live in large family groups, and love peanuts.  There are two families that we always stop and feed. 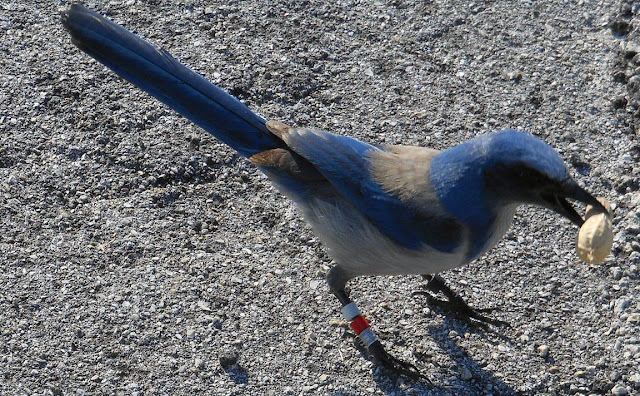 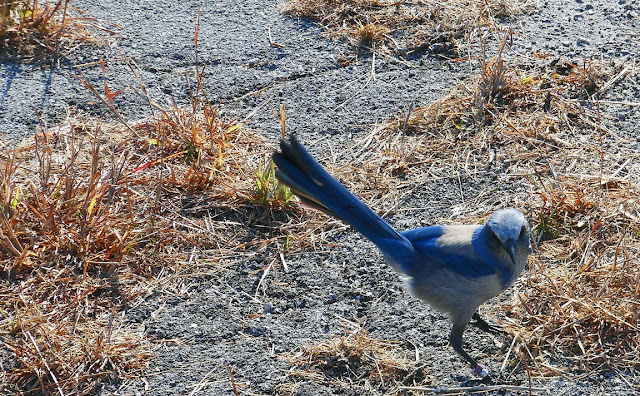 I can't finish this post without a quick note about that ranch pasture where the dog fennel was cut down last week.  The rancher has already moved some cattle into the pasture.  This marks the beginning of another fun game for us.  Cattle in this area are comfortable with people in cars and people on foot.  People on bicycles are another matter.  We routinely cause mini-stampedes when we ride the backroads near the pastures. 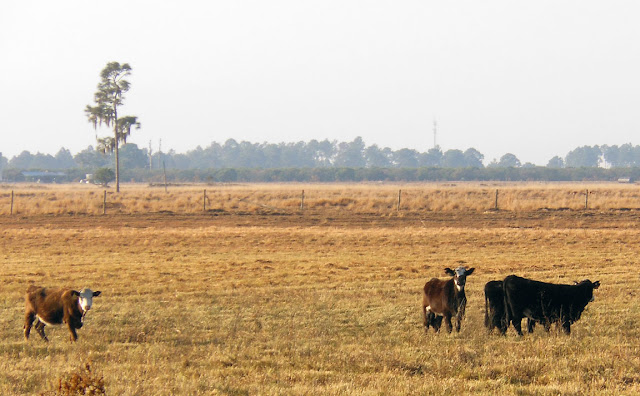 Al's back tire had sprung a leak.  Since we were just 5 miles or so from home, I left him standing on the side of the road with his sad bike, rode home, and hopped into our car.  It didn't take long to pick him and the bike up.  (The neatest thing about our Nissan Cube is that in a pinch you can haul a bike inside it without removing the bike's front wheel.  Saves the trouble of putting on the bike rack in situations like today's.)  We opted to let our bike shop fix the flat for us while we ran some errands.  Sometimes problems are best solved by just throwing a few dollars at them.

After being house bound for several days by high winds and cold weather, we finally rolled our bikes out for a short ride.  It was after 10 in the morning, only 56 degrees, but it was sunny and, thankfully, the wind was almost calm.  We rarely start our rides this late.

We saw a sign of spring on the nearby ranch, in the pasture with dog fennel that I have often photographed and posted in this blog.  Ranch machinery was mowing down the now brown stand of dog fennel.  Soon the pasture will be green and filled with cattle.  By early May, the first rains of summer will turn the land boggy, and wood storks, heron, and giant egrets will populate the area.  And by mid summer the dog fennel will once again stand tall. 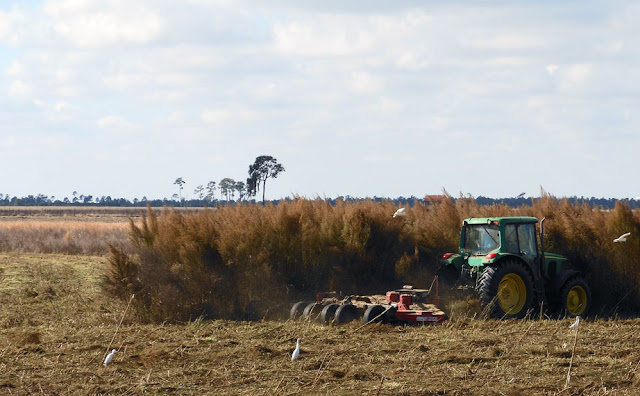