Running Away From Home on a Bicycle: Solitude in the Keys During High Tourist Season 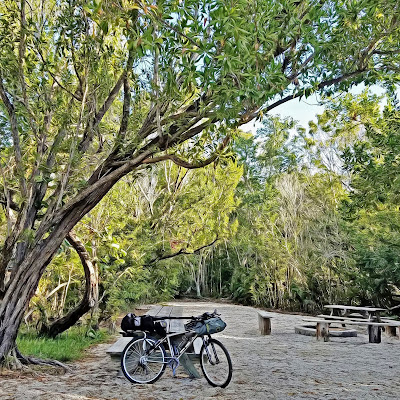 Overnight bicycle trips from my home in Miami get complicated in the winter high tourist season. Motel rates skyrocket. Campgrounds fill with RVs. And absolutely nothing is available without reservations made long in advance. Despite this, I wanted to take a last-minute overnight bicycle trip. I wanted to pedal down to the Keys.

First, I really wanted an ice cream cone from Mr. C's in Key Largo. It's a little ice cream shop that makes fresh waffle cones. You watch them make the waffle and shape it into a cone. Then you tell them what to flavors of ice cream to scoop into your cone.

Second, I wanted a bit of solitude in a place where I could see stars without the interference of urban lighting. I couldn't realistically afford even an "inexpensive" motel in the Keys in February. What I needed was a state park campsite that RVers or car campers couldn't use. (Wild camping just isn't a sensible option in urban South Florida.) Something as far from the Florida Keys Overseas Highway (US 1) as you can get without a boat. I knew that competition for these sites increased dramatically over weekends. Since I wanted that waffle cone from Mr. C's, and since there was a state park near Mr. C's, a plan formed.

I'd made several calls to the state park. I packed my bike and set off on a Wednesday. I appeared at the park in the late afternoon. The state parks go out of their way to find spaces for bicycle campers who show up without reservations. (That said, it isn't fair to put them on the spot more than necessary. I had called in the morning and checked that there was a decent chance they would have a spot I could use.) In my situation I actually wanted one of the out of the way spots where they send bicycle campers who arrive late in the day without reservations. I checked in. The ranger drew the route to my campsite on a park map. It was past the marina and down a footpath though the woods. The path took me to an isolated clearing designed as a group campsite. There was a fire pit with a semicircle of benches. An oversize grill. Several picnic tables. No electricity, of course.  A little farther down the path was a small older bathroom/shower building. Some solitude with the basic modern conveniences. Perfect. (Just what every scouting group or bicycle camper needs.)

The night sky was cloudless. Far from the city, the stars filled the sky with a brilliant display of twinkling lights. I decided to sleep in the open, using just my bug bivy so I could watch the night sky through the netting. I fell asleep listening to the wind in the treetops and watching the stars.

A very special and delightful running away from home on a bicycle memory.
Posted by Marsha at 2:28 PM