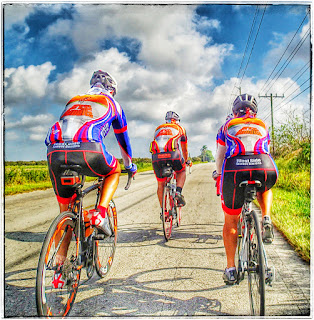 The weekend approached. Al checked who was riding where and when. WSSB (the West Side Sunset Bandits) were riding Saturday out of the Miccosukee Golf Course. Sunday they were heading up to Weston, a relatively new (mid 90s) suburb in Broward County. Both were just half-hour car rides from our home. Suburbia. Delightful.

So Saturday we joined WSSB at Miccosukee Golf Course, chatted and prepped bikes, took some pictures, then wheeled down the road in a nice double paceline. We were out for a sweet little 40-mile ride. We were headed to La Casita, a convenience store with great charm, cold water and ice, and good snacks. The weather was perfect, a peasant mix of clouds and sun, with only a hint of the sticky humidity of summer. This was a popular route, but it was my personal favorite because of how WSSB uses the stretch past the Miami-Executive Airport on the way back to Miccosukee Golf Course. I think of it as a speed zone because it is longer than the sprint zones I've done with other groups.

As we approached it, I kept my eye on Al, because everybody needs a rabbit to chase, and I have used Al as my rabbit for many, many years. I never really expect to catch him. The fun is all about the chase.

With one eye on my power meter and one on him, I gave it my all. Pedal, pedal, pedal! I was having a grand time when I suddenly realized I was hovering right at my power red line, that number that warns me to back it off and recover some. I dropped into a safer effort zone, let riders flow past me, recovered some, then punched it again for as long as I could. Of course, I didn't catch Al until the group slowed for turns, intersections, and a stoplight or two. But catching him really wasn't the point. Back at our cars, we chatted and laughed as we packed up our bikes, then headed home.

Sunday we again met WSSB. We parked our cars in a far corner of a large Publix grocery store parking lot. Alex Pruna took the first of the day's many pictures. Joe Cruz talked about the ride and the route. Soon we were clipping in and wheeling out to the road.

I must say here that the roads in Weston bring tears of happiness to a cyclist's eyes. Smooth pavement. Wide roads. Bike lanes everywhere it seemed. Beautiful landscaped parkways. It was glorious. We were off on a very excellent 50-mile ride.

Our first destination (and halfway point) was Vista View Park in Weston, a park with an actual large hill for us to climb. Not to mention we had a speed zone heading to the park. And another long speed zone on the way back to our cars. Fun! I tried chasing Al in the first speed zone, but (phooey!) I didn't have the juice. One of the guys (Alex) rolled by and offered me an assist. I gratefully hopped on his wheel. At the next speed zone I watched Al fade into the distance. I stayed with a group that was doing something I could handle.

One thing I really enjoy about WSSB is the mix of men and women riders. They ride well together. The stronger riders watch out for us other guys, but they let us push ourselves until we ask for some help. Nobody gets left behind. There are always people who form a slower group if needed. I especially like the women. They are focused when they ride, funny when they talk, and fierce in their determination to ride well.

And then, when all the pedaling was done, libations and food at a tailgate picnic. Good riding, good friends, good times.

How Can I Miss You If You Won't Go Away (Country Western Song, Dan Hicks) 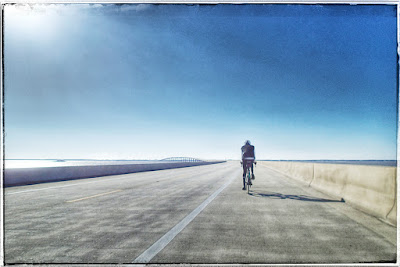 Al and I have been doing stuff together for a very long time. Spending days and weeks alone together in the cramped confines of itsy-bitsy tents and teeny-tiny campers in remote areas, well, it teaches you how to get along without resorting to small or large caliber handguns. It taught us an important thing about relationships: Space is a very important commodity.

When we moved to Miami, we started group riding. Paceline riding. Which is another way of saying riding close to the wheel of the bike in front of you. What you are doing in a paceline is drafting. It lets you go farther and faster with less effort. Which can be a good thing. Or at the very least, a very pleasant thing.

But you don't ride everywhere in a group. Nor do you want to. Al and I ride lots of miles by ourselves. When we are out riding on our own, we don't draft. It is a lot safer on long rides, particularly when one of us (me) is frequently paying more attention to the scenery than the road. And it keeps the weaker rider (yep, me) from getting lazy.

What we have is The 3 to 5 Bike Lengths Rule. We agree on a speed, then we pedal down the road, the second guy staying at least 3 to 5 bike lengths behind the guy in front. With these special conditions:

It's a great rule for us. The best part: We can enjoy riding together without being close enough to get on each other's nerves. And I like it, too, because the rule makes me a stronger rider.

Space is a wonderful thing. 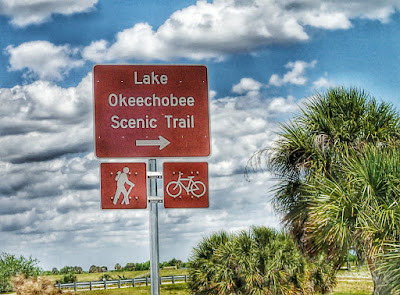 The northern paved portion of the L.O.S.T starts on route 78 just about at the county line. There is a large parking lot and restroom. 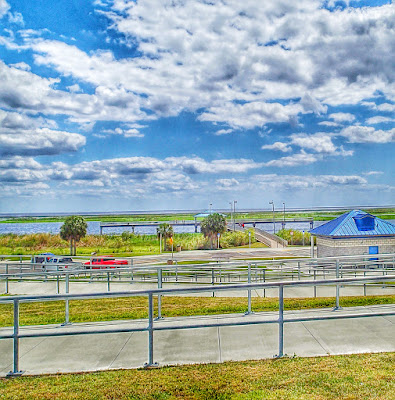 A few miles south the trail comes to the route 98 access point. There's a huge parking lot, restrooms, and a fishing pier. Across the street from the access point is a gas station/convenience store/Dunkin Donuts. 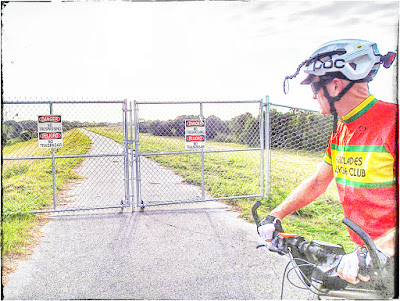 At Taylor Creek, about 2 miles south of the access point with the fishing pier, the trail is diverted to the highway to cross Taylor Creek. If you return to the trail on the other side of Taylor Creek, you quickly pedal up to a gate across the trail blocking users from dike repairs ahead. So stay on the highway for a couple more miles to the next access point. Once you get back on the trail, it is clear sailing all the way to Port Mayaca Lock and Dam. 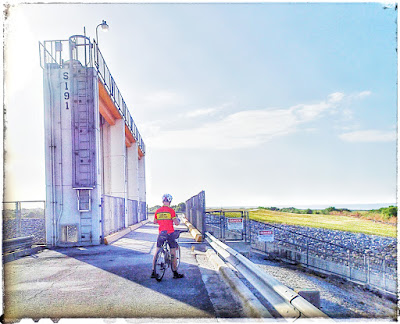 In this area of the trail you don't have to get off the trail at water control structures. At this one we spent a good amount of time watching a 10-foot alligator slowly circling in the water below.

It doesn't get any better than this. The lake on your right, the dike canal on your left, and a wide, straight, paved, car-free trail as far as the eye can see. 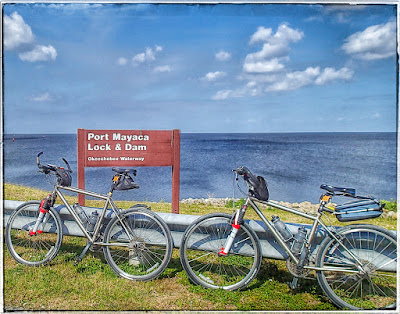 It's about 27 miles to Port Mayaca Lock and Dam. Dike repairs put you back on the highway at this point. The smarter move is to head back to Okeechobee.

This is a unique and beautiful South Florida trail. Quiet. Solitude. A great paved trail.
Posted by Marsha at 6:14 PM 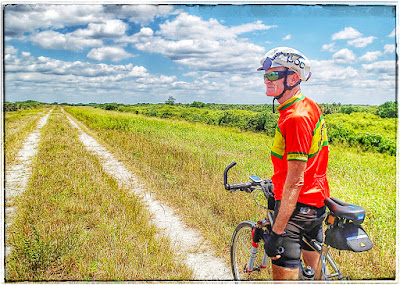 We just needed to get away from Miami. Anywhere would do. We picked Okeechobee, Florida.

Okeechobee is a quiet agricultural town on the northern edge of Lake Okeechobee. It is unpretentious and unsophisticated. Cattle graze a few hundred feet from our motel. Snowbirds fill RV resorts during the winter. The big sport here is fishing.

It is easy to access the longest paved segments of the Lake Okeechobee Scenic Trail (the L.O.S.T.) from Okeechobee. We checked into a motel near one of the L.O.S.T.'s access points. But from our motel we could also pedal over to the unpaved part of the trail.

It's mainly double track gravel. We aren't gravel grinders. To me, that is a faster more competitive ride. What we are is gravel ramblers.

Today we pedaled the double track until the grass got mid-calf high as we pedaled and pollen filled the air. We started to sneeze. We started to cough. We turned around and headed out of the grasses. We finished our ride on the paved trail, hopping off the trail when we got to the access point near our motel.

Even with too much pollen, it's all good on a double track ramble.

This past weekend we went to Punta Gorda for Pedal and Play In Paradise. It's an annual ride that benefits the Leukemia and Lymphoma Society and TEAM Punta Gorda's Bicycle Friendly Community Initiatives. We were going to do the 62-mile route with friends from the West Side Sunset Bandits (WSSB) team and the Everglades Bicycle Club (EBC). Having a large group to ride with at an out-of-town event is a relatively new thing for us, an interesting and fun new addition to our Florida bike travels.

On Saturday morning we headed to the pre-ride breakfast in the dark of pre-dawn. We munched and chatted, pulled our gear together, and organized ourselves for the ride. At 7:45 they announced that the 62-mile people should head out. Which we did. While it was hot and humid for the beginning of April, the weatherman promised we'd have at least a little cloud cover. There would be some wind, but we'd be back for lunch before it really picked up. So off our group pedaled into the bright morning sunlight. 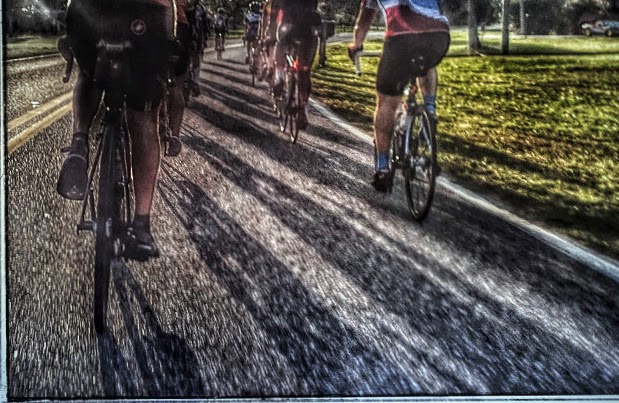 The first rest stop was only 14 miles down the road. Since the next rest stop was at 42 miles into the ride, we made a quick stop and topped off water bottles and munched. I munched some of the fresh blueberries they had. Blueberries! How great is that? We got back on the road. Pedal, pedal, pedal. We made good time. The wind slowly increased. Alex Pruna rolled up and down our double paceline, taking pictures and teasing smiles out of us even as we began feeling sweaty from the heat. Joe Cruz moved up and down the line, too. He kept tabs on all the riders in the group, making sure everyone was doing OK. As always, there was a group of strong riders that did the lion's share of the pulling. Something that the whole group appreciated on a day when the increasing wind was giving us all a nice workout.

Finally we came to the last rest stop. Where the ride organizers had put out a bit of cycling catnip for the riders: A big poster of two cartoon cyclists with holes where the faces should be. Hmmmm. Riders eyed the big poster. Then they slowly began gathering near it. Soon the clowning began.
Then we were back on the road. Pedal, pedal, pedal. And we were back at ride headquarters for lunch, libations, ice cream, and socializing.

Pedal and Play in Paradise is well-organized with good, well-marked routes. It is definitely one of the rides we will recommend to friends.

Not to mention that Al will be talking about the ride for a long, long time. There were drawings for prizes at the post-ride lunch. And Al, who has never won anything before in his entire life, won two free three-day tickets to the Mt. Dora Bicycle Festival! Happy dance time!