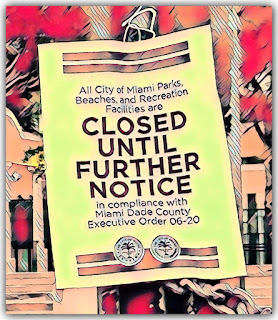 Like everyone that rides a bicycle in a city, I used to bitch about traffic. Before moving to Miami, I lived in rural areas for a lot of years. It took a while for me to get used to Miami traffic. But with the corona virus crisis, traffic volume has dropped. A lot.

While people need to stay at home, we can get out to go to the grocery or pharmacy, to walk the dog, or to go for a run or a bike ride. I'm continuing to ride my bike. Mostly by myself. Since I can get lost a half mile from home, I rely on my GPS gadgets and routes programmed into them.

At first it was great. Fewer cars really changed the mood of urban riding. But it didn't take long to realize there were some real challenges, too. No problem if you were just taking a short pedal around the neighborhood. But for a longer ride in an urban area you need places for water and bathroom breaks. (Like there aren't groves and isolated roads in Miami like in rural areas of Florida.) My breaks along my old routes were mainly at parks, marinas, and recreational facilities. Now those are posted and padlocked.

So I'm developing new routes. Ones that rely mainly on the ubiquitous Publix grocery stores for breaks. Now I could create the routes on a site like Ride with GPS, but I'm just too lazy for that method. I use Google maps on my phone to create a Publix to Publix route. Then I use the phone for GPS guidance as I ride. I wander about rather than strictly following the Google route which of course, adjusts for my detours. Then at the end of the ride if I liked the route, I save my Garmin ride data on my Garmin as a course and give it a name. Easy peasy.

I'm going to have a chance to explore parts of Miami I used to avoid because of traffic. One new thing for me, though, is that I have to remember to carry a lock or two for stops. (While I saw one cyclist pushing his bike into a Publix, I'm not planning to try that myself.)

I'm looking forward to finding out what I can see on these rides. Yesterday I wanted a not too long ride, so I started out along the Miami River with plans to head up to Wynwood to look at the murals. Instead I found myself meandering around West Flagler, then Little Havana, and then the Gables, before finally turning toward home.

There are a lot of really cool neighborhoods in Miami. I think I'll spend the next few weeks being a bicycle tourist in my own city. Should be fun.
Posted by Marsha at 11:34 AM